Why Japanese Hedge Funds Continue To Impress Us

Having just come back from one of our frequent research trips to Japan, we were once again struck by the attractiveness of Japanese hedge funds, and once again surprised by the low level of investment by foreign allocators. It has been our thesis for a long time that Japan, due to a number of structural reasons, is one of the best hedge fund alpha markets in the world, and 2018 seems to be no different. Though this year has not been an easy one for Japanese markets, many of the managers we have selected, or have been tracking closely, have not only managed to outperform long only equity markets, but have managed to generate respectable (in some cases significant) absolute returns with limited risk.

We have been long term advocates of Japanese hedge funds, and have written extensively on the opportunities that we perceive to exist. These range from a market that is very broad and liquid but very much under researched (approx.3600 listed equities but only about 20% with analyst coverage, mainly focused on large caps), to an astonishingly low ratio of hedge fund assets to total market cap (about 0.5% in Japan versus roughly 8% in Europe and 6% in the US), which means less competition for good ideas. The low correlation of Japanese hedge funds amongst each other (suggesting that they are not all in the same trades), as well as the fact that they have significantly outperformed their long only benchmarks with significantly lower risk due to generally low net exposures, further adds to their attractiveness.

Of course, these figures are averages, and we have identified many funds that both historically, and so far this year, have done significantly better on an absolute, and on a risk adjusted basis. Year to date, through the end of June, the HFRI Japan Index outperformed the TOPIX Index by approx. 3.1% (managers on our short list on average outperformed the TOPIX Index by approx. 5.7%). Only European hedge funds did better during that period, with an approx. 6.7% outperformance versus STOXX® Europe 600 Index, but over 10 years they still significantly lag their Japanese peers (North American hedge funds broadly tracked the S&P 500 Index with a slight outperformance of 1.2% at the half-year mark). 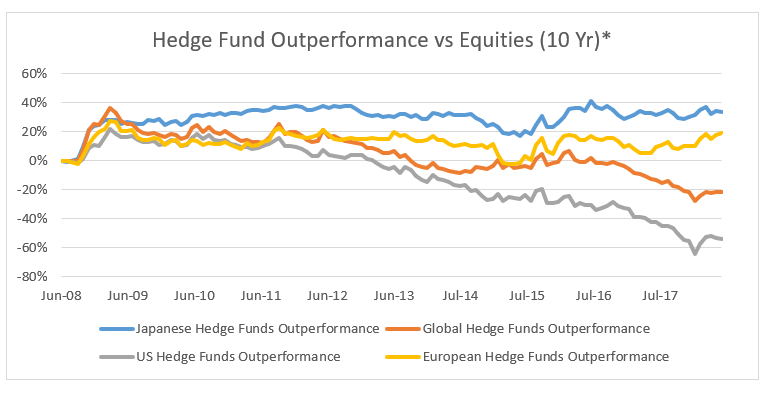 Given the negative performance of Japanese equity markets in the first half of 2018, with the TOPIX index down approx.-4.77% and the smaller cap focused MOTHERS index down -11.5%, it is particularly interesting for us to see that local managers have managed to fare so well. What is even more impressive is that this comes after many have managed to keep pace with long only indices last year, and to generate returns, net of fees, equal to those of long only benchmarks, thereby demonstrating their superior risk management and the un-correlated down side returns that we look for.

We have noticed that many managers have been able to take advantage of the rally in small caps that took place over the last few years, but adjust their exposures in time to avoid getting hurt by recent weakness in the market. This timely shift has allowed them to significantly protect investor capital so far this year, but not at the expense of historical returns. This is very much in line with the track record of the past 10 years, where Japanese hedge funds as a group have managed to avoid a significant part of the market’s downside, including during the 2008 crisis, while participating substantially on the upside. Japanese managers seem to cope with volatility better than many of their global peers, and when we superimpose the careers of some of our favorite managers with market returns, we can quickly see why.  Significant volatility events and drawn out periods of market losses seem common for Japanese markets, and only those managers who were able to adapt to this environment have been able to survive and thrive.

Besides year to date performance, we are also very encouraged by the number of new launches, which appear to be higher and more exciting than in years past. These are the result of both established portfolio managers leaving hard closed funds to set up on their own, and existing managers launching new funds to take advantage of very idiosyncratically Japanese opportunities. These range from last year’s introduction of the stewardship code and the resultant increase in focus on ROI, to changes in accounting rules, and Japanese companies releasing their midterm plans (typically three-year forecasts).   Some of these opportunities may only persist for a limited time period, but appear to us be very interesting, with clear catalysts, and the potential for non-correlated returns. There is also no doubt that the recent initiative by the government of Tokyo to encourage more hedge fund launches has also had a positive impact, and we have heard from a number of people that the Japanese FSA has been very helpful in assisting nascent hedge funds.

The biggest challenge for investors remains to secure capacity with the best Japanese managers. While the universe is quite small, with only about 80-120 managers, many of which are closed to new investors, the range of strategies on offer always amazes us. We have met with mangers that are purely systematic, trading oriented, fundamental long short, shareholder activists, sector specialist and purely focused on a specific idea with a clear catalyst and limited in time. While all of these are quite different, the one thing they seem to have in common is an ability to manage risk, and to take advantage of a deep pool of opportunities in a market that has yet to become crowded. We are encouraged by their long-term outperformance, feel that they compare very favourably in a global context, and given their relative performance to other hedge funds clearly warrant a higher allocation by investors. As long as the structural inefficiencies of the Japanese markets persist, we continue to favour Japanese over other hedge funds. Of course, we keep a close eye on any structural changes, which would diminish the opportunity set, but for now we remain constructive, and look forward to many interesting new launches.

Patrick Ghali is Co-Founder and Managing Partner of Sussex Partners