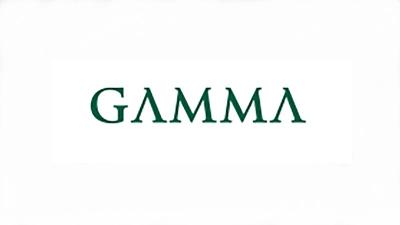 What Is Your Buffer?

We are getting old

We keep hearing that we are getting older. In 2015, the world’s median age was just under 30 and the UN projects that the median age will be 36 by 2050.[1] Undoubtedly, this is good news. Medical advancements are supporting longer, healthier lives, while there is a well-established link between increasing prosperity and a decreasing number of children per mother.

Yet this demographic shift also creates a problem for governments. As populations age, a smaller share of the population is working; unless, of course, a government takes the politically-difficult decision to raise the retirement age. A larger, retired population places an added burden on the public purse as more people rely on health services and draw down their state pensions.

So how should governments go about solving this problem?

Not everyone is in the same boat

To begin, it is important to highlight that countries are ageing at different rates. A useful measure to compare ageing is known as the Old-Age Dependency ratio (ODR), the ratio of those aged 65+ to those aged 15-64. 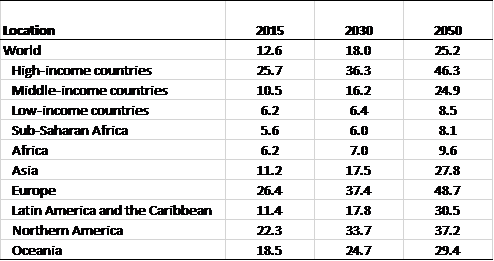 The ODR, however, does not tell the whole story. It also matters how successfully people are included in the labour market. For this, a second ratio known as the Economic Dependency Ratio (EDR) can help.

This ratio compares the portion of the population in work, versus the portion that is not working. A figure over 1.0 implies that there are more inactive than active members. Inactive members could be out of the workforce because they are a stay-at-home parent, a pensioner, or a full-time student. There is no “right” level for the EDR, and the ratio will vary between countries for a number of reasons reflecting the overall flexibility of the working environment, the structure of society, social customs and so on.

Charting the ODR versus the EDR indicates that there is a weak relationship between the two ratios. Some countries like Italy and Greece (in the green box) have a large old-age population (a high ODR) and high levels of inactivity (an underutilized population and, therefore, a high EDR). Other countries like Germany and Sweden (brown box) have high ODRs but low EDRs, suggesting that those countries might have policies to encourage employment. In the yellow box are young countries with underutilized populations, perhaps because there is less urgency, while the grey box contains young countries with high activity and labour market participation (and so low EDRs).

ODR versus EDR for Europe[4] 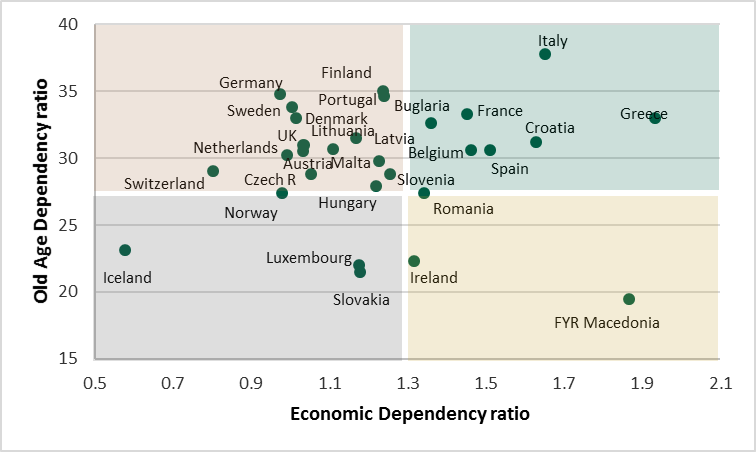 Instinct is to view those countries in the grey box as efficiently deploying their working population. Yet those nations in the green box actually have an economic buffer to use in the form of an underutilized workforce hiding away that could potentially be activated to help deal with the cost of ageing. It is more helpful to look at how nations’ demographics will change in the next 50 years to determine the impact of this buffer.

Charting the change in ODR from 2015 to 2065 versus EDR, it emerges that countries, like Greece and Spain, have a potential buffer – in the form of an underutilized workforce - to counteract the cost of their ageing populations. By contrast, countries in the brown box, like Iceland, are also projected to age substantially, but they have a smaller buffer of underutilized citizens to ease the economic impact. Indeed, it is probably those nations in the yellow box that are in the best position, with a relatively small change in the age profile going forward and a large underutilized workforce.

In short, it is not only how old a country is today that is crucial, but how much older it is going to get in coming decades, and what they have in the arsenal to tackle the problems that an ageing society brings.

Change in ODR versus EDR for Europe 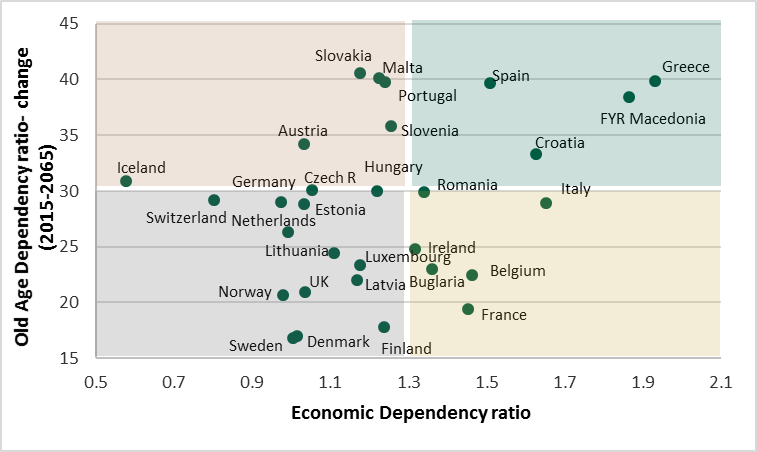 When people consider the nature of the ageing problem, two solutions are often put forward: have more children (i.e. increase fertility) and import more people of working age. Unfortunately, these suggestions are not as straightforward as they sound.

Allowing inward immigration of workers can certainly help an economy, but it is unlikely to solve the problem. Population projections build in a level of immigration. Therefore, immigration would have to be higher than expected and the concomitant demand of new immigrants on public services would have to be unexpectedly lower for a meaningful impact. As for increases in fertility, the trend appears to be moving in the opposite direction. As societies increase in prosperity, the average number of children per woman declines.

To take population projections for Iceland as an example, only sustained immigration levels well above recent experience and a sharp increase in the fertility rate would have a material impact on the structure of Iceland’s population. 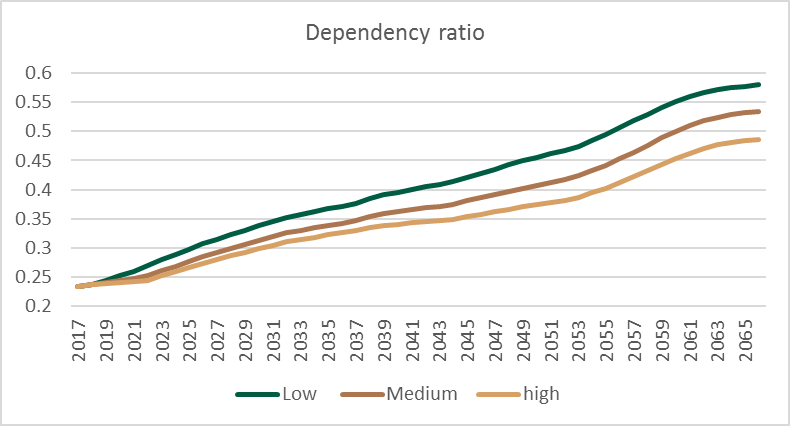 Think outside the box

When it comes to our ageing population worldwide, it is critical to evaluate a country’s standing based on its age profile going forward alongside the degree to which the working-age population is being utilized. With those figures, we can then determine whether a country has a buffer in their labour force on which to draw.

Those countries facing a steep ageing profile and an increased economic burden with an under-utilised population should look at policies that increase workplace flexibility, such as those which promote participation by women and the older-age groups.  For those countries with a highly-utilized workforce, a different strategy might be needed, including delayed retirement, a higher state pension age, and a bigger role for the private sector in funding care.  Higher immigration and fertility could be helpful at the margin but are unlikely to provide a meaningful solution.

We are all living longer because medical advances are keeping us alive and healthy for longer.  Yet this longevity also carries with it some economic risks. To solve them, governments must think outside the box.

[5] Statistics Iceland. The low and high scenarios have lower and higher levels of fertility and immigration.