What Rising Rates Mean For Hedge Fund Returns After Fees

As we continue to migrate towards a world of higher short-term interest rates, hedge funds and other active managers have the potential to capitalize on an environment of increased dispersion in global asset price movements. We have already seen hedge fund alpha begin to improve in certain areas, despite a record level of assets under management (“AUM”) in the hedge fund space.

Hedge fund fee structures, if not aligned properly, have the potential to prevent investors from fully benefiting from increased alpha. Informed investors are mindful of the fact that fee structures vary across hedge funds, and there is no one agreed-upon standard for properly aligning incentives between fund managers and fund investors. Investors who pay keen attention to the economics of varying fee structures and select their investments accordingly can improve their returns, being sure that any increases in alpha are more equally shared with both the fund manager and the fund investor.

How do interest rates interact with these incentives? Some investors argue that in a low-interest rate environment, the low return expectations of hedge funds are due to the resulting lower rebate that fund managers earn when shorting securities. The argument goes like this: as rates increase, hedge funds will start to perform better as the short rebate that investors receive when shorting securities increases. This may be true on an absolute basis, but hedge funds typically charge performance fees on total returns, and thus on this rebate, which acts very much like a cash-like security. So, higher interest rates may actually make it harder for hedge funds to outperform liquid markets, unless alpha improves.

As interest rates begin to rise from historically low levels, we should understand how the interaction of higher risk free rates and performance fees on absolute returns can impact hedge fund performance, especially since AUM in the hedge fund space was 75% higher at the end of 2016 than it was a decade prior, a time when interest rates were substantially higher (see Graph 1). 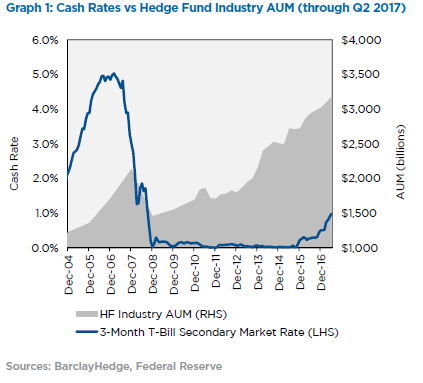 Hedge funds, like every investment, should be compared to a risk-free investment (e.g. “cash” or T-bills), since every investment should earn you this risk-free rate plus a risk premium. The return of a long/short equity hedge fund, for example, could be evaluated on an excess-of cash basis. A market-neutral long/short equity fund that is 100% long SPY (S&P 500 ETF) and 100% short IVV (a different S&P 500 ETF) is remarkably similar to a cash investment: a cash-like rebate is earned on the short position, and the performance of the short position almost exactly offsets the performance of the long position. But most long/short equity managers charge a performance fee on the total return of the fund, usually 20%. In this example, the long/short equity fund is like a cash-yielding fund that only gives investors 80% of the cash yield and pays itself the other 20%.

This is not a big deal in a world of near-zero interest rates. However, it becomes a bigger deal as interest rates start to rise. The absolute returns of the short rebate will certainly go up, but a fund’s ability to outperform cash goes down on a net-of-fees basis.

Let us call this effect the “performance fee drag from the cash rate.” A hedge fund manager is no smarter because cash yields are higher, but can very well charge investors a higher fee for the higher returns that cash will provide. 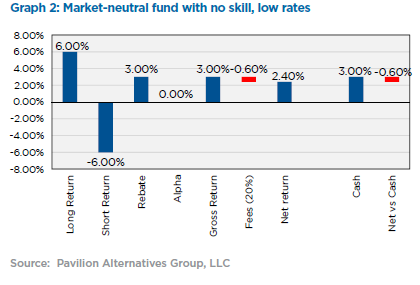 As cash rates increase, managers need to create more and more alpha in order to pay for the performance fee drag from the cash rate. While alpha may improve in the forward-looking environment, this performance fee arrangement shifts more of the alpha to the manager. 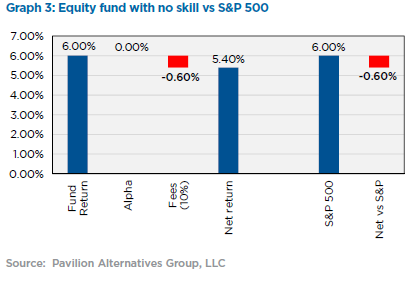 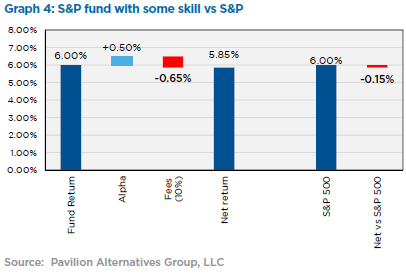 The same rationale can be applied to the market-neutral hedge fund example with the exception that given the same level of skill, a manager that was outperforming cash net of fees in a low interest rate environment could eventually under-perform cash. That is because the manager is being paid higher fees despite the same level of value added. The manager is better off, but the investor is worse off. 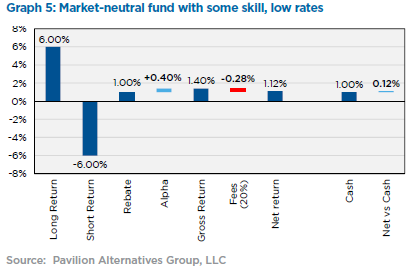 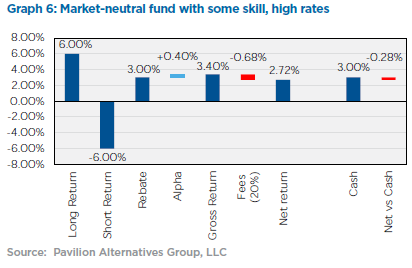 There are a number of reasons why the traditional 2/20 fee model for hedge funds does not optimally align incentives with investors. There have been a number of attempts by industry professionals to solve some of these issues, such as including clawbacks to performance fees, the “1 or 30” framework, or reduced management fees. However, none of these address the economic giveaway that charging performance fees on beta (long-biased funds) or performance fees on cash (market-neutral funds) would create. In the recent environment, shifting to market-neutral strategies has reduced this giveaway, but the giveaway is poised to rise alongside cash rates. By implementing beta-oriented and/or cash hurdles, managers could be better aligned with investors. For example, if managers charged a higher performance fee of say 50% instead of 20% (not a current industry standard) over a cash-based hurdle, at minimum, investors could be better off (see Graph 7): 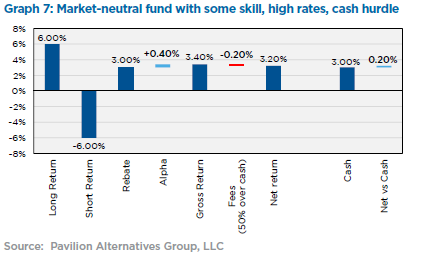 As interest rates begin to rise from historically low levels, investors should be cognizant that a performance fee on total performance creates a larger drag on a hedge fund’s ability to outperform a mix of stocks and bonds that has similar exposures, risks, and objectives. This applies both to market-neutral funds as well as long-biased funds. When calculating performance fees for managers, the argument for using a cash-oriented hurdle for hedge funds is a fundamentally similar argument to using a beta-oriented hurdle for long-only funds.

Investors should be mindful of the effect of the performance fee drag on cash rates when negotiating fees with managers, since the performance fee that managers charge on the rising risk-free portion of returns can be thought of as an increasing management fee. Doing so will allow investors to avoid a transfer of value from investors to investment managers in a rising rate environment, thus improving investors’ ability to capture a larger share of excess returns. We do not think that this performance fee drag from cash is large enough to offset the potential increased alpha in the space, but implementing a cash-based hurdle would help maintain the economic split of excess returns between fund managers and investors.

Hedge funds have the potential to produce stronger returns in a rising rate environment, but investors who are keenly aware of the economics of underlying fee structures and their implications will be better able to select funds that share this out-performance more equally between fund managers and investors.